As a startup founder, you are well aware of the three elements that factor into scaling your startup:

Location can help you achieve each of these key factors. Basing your startup in a community full of tech savvy startups and entrepreneurs can make all the difference for your growth trajectory.

You may think that Silicon Valley is the perfect location to base your operations from, but a quick look at global tech trends will show you that London is becoming more and more of a draw for tech entrepreneurs. Despite Brexit, London remains Europe’s number one tech-hub for investment.

So what’s so special about the bustling British metropolis?

Besides its goal to become the FinTech capital of the world by 2020, London is worth checking out if you’re a tech founder for a host of reasons.

You have the government’s all-out support through generous tax breaks and relaxed visa rules for entrepreneurs. Plus, the city is a melting pot of top tech talent with diverse cultural backgrounds. Not to mention that London has more tech unicorns — companies valued at more than a $1 billion — than any other city in Europe.

For former CEO of Tech City Joanna Shields, London offers what the great cities of the US possess and more. "It has New York's urban diversity, LA's concentration of media, film, TV and creative industries, and Washington DC's proximity of government, all in one place,” says Shields.

Whether you’re thinking about scaling up your team of ten or starting from scratch, read the remainder of the article to learn if London has everything you need to build your tech startup.

1. You get to be a part of a thriving tech scene.

One of the most notable aspects of building a tech startup in London is the city's thriving tech scene.

In last year’s European City Digital Index, London was crowned as the top city in Europe for digital entrepreneurship, both for startups and scale-ups (rapidly-growing firms with at least ten employees).

More and more, tech startups are popping up all over London, with high concentrations near Old Street in East London (considered the third-largest technology startup cluster in the world after San Francisco and New York City). As LyteSpark’s Alex Hunte notes:

“Business in London is thriving and the city is home to hundreds of disruptive start-ups and innovative small businesses. Not only is this an inspiring environment to be a part of, there is also a real demand for technology and innovation that will enhance the way we work, communicate and help small businesses to grow. London’s Tech City sits alongside those of New York and San Francisco."

Additionally, the UK is second in the world for tech startup exits after the US.

If you’re worried about finding top tech talent, some of the best universities in the world are in London, or just a few hours away.

“There’s a palpable vibe that startups are the cool thing to do versus finance, consulting and other career paths top students historically did. Much like MIT and Penn students joining startups in SF and NYC instead of going to Wall Street, newly minted Cambridge grads are ditching the city for startups in East London,” Eniac Ventures’ founder Hadley Harris observed.

Stack Overflow, an online community for developers, noted in their 2016 London’s Developer EcoSystem Report that there are currently 325,651 professional software developers in London. That’s more than in the metropolitan areas of San Francisco, Paris, or New York.

Apart from the growing community of developers working with newer coding environments such as Node.js, the report also noted that the city is home to an emerging group of data scientists and machine learning technologists.

3. A variety of campuses and coworking spaces dedicated to tech.

For a start, there are over 150 tech-centric workspaces and coworking spaces in London to date. This is good news for startups wanting to work from premium locations without overspending or committing to long-term rental agreements.

There are unique spaces like Plexal, one of the biggest tech hubs in Europe, popping up all over the city. Designed as a mini city patterned after principles of modern urban planning and technology clusters, the 1.2 million sq ft campus offers technology startups a range of flexible work accommodations, including open studio memberships and tailor-made private offices.

For tech startups seeking a community of tech entrepreneurs who can help and support one another in the city, RocketSpace tech campus recently opened its London doors at Angel Tube Station in June 2017. The newest London tech campus exclusively admits Seed to Series C funded startups with MVPs.

Members of RocketSpace's London location enjoy the same level of amenities as the members working from the San Francisco tech campus, including:

In Ernst & Young's 2017 UK Attractiveness Survey, London’s standing as the UK’s dominant FDI (foreign direct investment) location continued in 2016. This is supported by findings of government-funded non-profit London & Partners: VCs invested a total of £1.1bn in London's tech firms for the first half of 2017 despite Brexit.

Overall, the UK saw its number of FDI projects secured in 2016 rise once again to the highest level on record, maintaining its position as Europe’s leading country for FDI ahead of Germany. The country also remained the number one recipient of FDI jobs.

Whether you’re considering Canary Wharf, Kingscross, or Shoreditch for your next startup location, it doesn’t really matter where exactly in London because investors haven’t stopped putting money into the capital. Wired UK’s Rownlad Manthorpe reports that venture capitalists have invested £395 million in London-based companies since the turn of this year, up from £245 million in the preceding three months.

London is Ready for Your Startup, Are You Ready for London?

Tech founders who are making London their home not only see the city as a gateway to other European markets, but increasingly to global markets as well.

With the combined support of the government, and solid VC backing, tech startups are more driven to follow the footsteps of UK unicorns like Shazam, Deliveroo, and TransferWise.

“Being in London is not an option, it’s an imperative. It’s a fundamental part of our growth,” says Melissa Di Donato of Salesforce in government-funded non-profit London & Partners’ Transatlantic Tech Boom Report last year.

With so many enticing advantages for tech startups, coworking spaces and tech campuses in London are affordable options for startups seeking communities where they can thrive and network with the best minds in tech entrepreneurship.

At RocketSpace London, you'll get the same tech startup ecosystem that has inspired several success stories over the past six years, in which we have seen 18 “unicorns” (including Uber, Zappos and Spotify) raise more than $21 billion in funding.

For more coworking spaces, resources, meetups, and more, get The London Startup Guide: 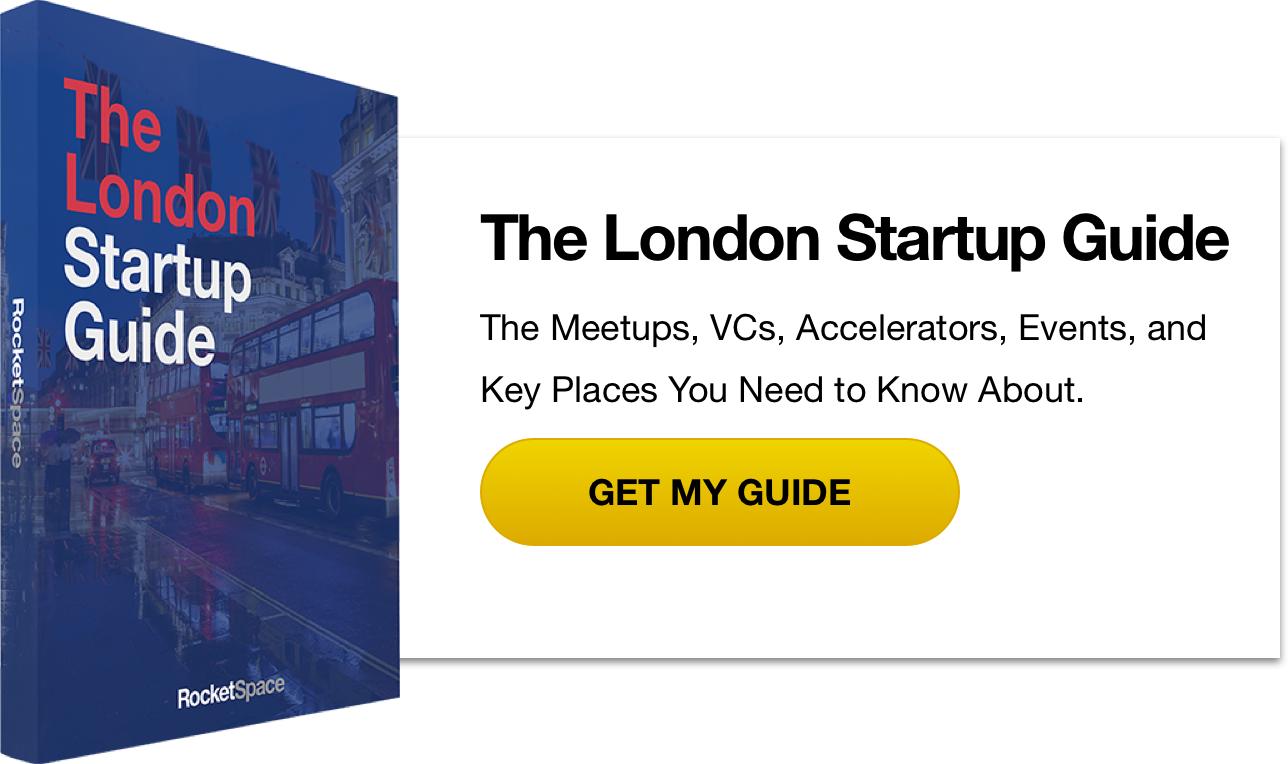