What do you learn about startups by rowing for 45 days and 2,400 miles across the Pacific? Quite a lot, says serial entrepreneur and investor Sami Inkinen.

Speaking at RocketSpace recently, Inkinen shared his experience of rowing with his wife from Monterrey, California, to Waikiki, Hawaii, and pointed to the top five lessons learned from that challenging endeavor — all of which tie back to being a successful entrepreneur. In the process of co-founding real estate search engine Trulia, which he led to an IPO, Inkinen learned a lot of these lessons the hard way, he says.

Inkinen now is the founder and CEO of Virta Health, which is focused on curing chronic diseases, and he's an investor at Obvious Ventures, with a personal focus on investments that promote "healthy living."

Here are the five entrepreneurial lessons and tips Inkinen believes can help every startup entrepreneur:

The top four worries for any entrepreneur should be "people, strategy, cash and an awesome product," says Inkinen. Founders should focus their time on those components and leave the small stuff to others.

On his rowing adventure, Inkinen used this same framework, choosing the right people (his wife), a straight-forward strategy (getting to Hawaii in 90 days with a certain rowing pattern), and the right resources (a boat that was deemed unsinkable). The product? A trying, but fruitful journey that he says changed his life.

2. Lean on Experimentation, Not Expertise

When you're new to an industry or topic, it's natural to want to reach out for advice from experts. After all, they have experience, right? Inkinen disagrees. Trust experimentation over expertise, he says.

When Inkinen and his wife, Meredith Loring — who works in business operations at Virta Health — set off on their cross-Pacific row, they had been told by experts that they should alternate their sleeping non-stop, with one person rowing for two hours while the other slept. Two days into the trip, they scrapped the expert advice and learned that their optimal strategy was actually rowing together for 12 hours daily, then allowing six full hours of sleep per person while the other rowed solo. It took a number of trials to figure that out, though. Nothing beats experience.

Startups have limited time to succeed; they must hit specific milestones within pre-determined time frames to stay on track. "Understand the metrics and drivers that take you or your company forward, and measure those," says Inkinen. "Put them on your wall." Having those numbers in front of you is liberating, he adds, because you know what you're working towards.

For the rowing challenge, Inkinen and his wife consistently measured their performance by testing how much fat versus sugar they were burning while training. The average person burns about 60 to 70 percent sugar on such a test, which only enables about four hours of non-stop rowing time before the person "bonks." Inkinen and his wife trained up to burning about 98 percent fat, which enabled them to row for 18 hours straight daily while on their adventure. Startups are no different. Find and measure the levers that make a difference — and tweak them for success.

4. Have a Growth Mindset

Inkinen clearly loves sports and is very competitive. When it comes to his athletic prowess, though, he started from ground zero and worked his way up. "It took eight years of tiny, tiny, tiny, tiny progress every month" to train up to win the IRONMAN 70.3 World Championship triathlon in his age group, he shared. He had no triathlon experience when he moved to the United States, yet he was eventually able to make enough progress to win a major competition.

He attributes his success to having a growth mindset, which he applies to his business and personal life. He lives by the "1 percent better every day" formula, which if followed, results in about 3,700 percent compounded return on improvement over the course of one year, he says.

No matter how smart you are, always be learning from your past successes and failures.

People often ask Inkinen what he most looked forward to once he and his wife made it back to land after the rowing adventure. His answer? "Nothing." During the row, he practiced mindfulness, focusing on being in the moment of the "pain and process." Embracing the hard parts of the row, or of his business, enables him to get through the hard times, he says.

Beyond mindfulness, he recommends not participating in the harmful office competition of "who slept less." "Sleep is the number one performance-enhancing drug," he says. "If you work in an industry where you use your brain and not just your hands, it's in your best interest to get enough sleep to perform well. Don't think you're cool because you only got two hours of sleep last night. It's actually a horrible disservice to your company, your investors, and yourself."

Cultivate your brain through mindfulness and sleep, and you're on the right track, Inkinen advises. 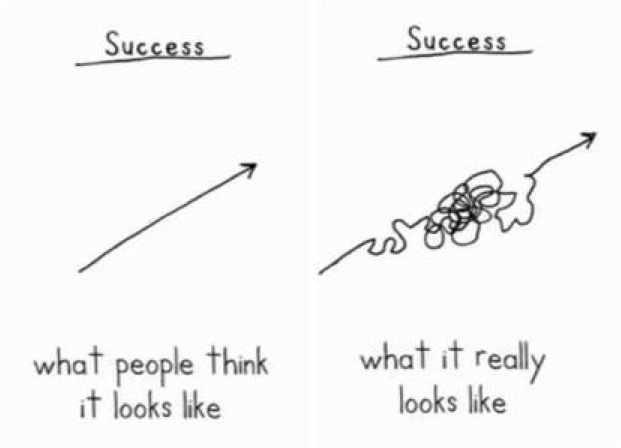 Inkinen flashed a blurry sketch on the screen and grinned. "What you read from TechCrunch and what people think success looks like is ... absolutely not true." he says. "If you want to create an industry or disrupt an industry, by definition, your life is going to be what it [looks like] on the right [of this diagram] all the time."

Entrepreneurial success is not a straight line to the top. It's an unpredictable series of ups and downs. It doesn't take a row in the Pacific to learn that, but the clarity of 45 days on the water certainly can't hurt.