Did you know that 90 percent of all tech startups fail? If you’re an aspiring tech startup founder, the odds are certainly stacked against you.

“While Silicon Valley may stand undefeated as the most prominent name for tech entrepreneurs and startup visionaries, other regions all over the world are worthy competitors,” says Lyanne Alfaro, contributor at Business Insider.

The 7 Best Startup Ecosystems to Build a Tech Company

Toronto was recently named one of the world’s most high-tech cities. The city produces more than $52 billion in economic output per year and is home to 30 percent of Canada’s information technology firms. Moreover, according to KPMG’s Global Innovation Report, Toronto is set up to be one of the world’s leading technology innovation hubs for many years to come.

“Toronto has been rapidly grabbing the world’s attention as a destination for financial and intellectual capital in technology innovation,” says Anuj Madan, a national industry leader for technology, media, and telecommunications at KPMG in Canada.

Toronto has experienced a rapid influx in tech-oriented businesses thanks, in part, to an abundance of trained talent. Approximately 150,000 students live within 90 minutes of the city center. Facebook and Google have begun to source recruits from this international pool of top tech talent.

“The pool of talent we have here, I am told by people outside of Toronto and outside of Ontario, is as rich as any in the world,” said Toronto Mayor John Tory. Tel Aviv is Israel’s business capital and one of the most active startup ecosystems in the world. The city currently supports more than 70 multinational tech corporate giants including Google, Apple, Facebook, and Microsoft. Moreover, Tel Aviv is a hotbed for cybersecurity and mobility technology. Recently, Intel bought Mobileye, an autonomous driving technology company, for a whopping $15.3 billion.

Tel Aviv’s startup community is close-knit. Startup founders can find a Meetup group for almost every vertical and topic. These groups allow members to share information and learn from one another — it’s incredibly easy to connect with like-minded startup founders. However, before relocating to Tel Aviv, consider the city’s high cost of living and poor public transportation network. Additionally, cultural differences can make for tense business conversations.

Bangalore is frequently referred to as India’s Silicon Valley. The city is fast becoming the hub of high-value, successful startups. Members of this tech startup ecosystem are highly skilled and well-trained. Currently, 35 percent of the country’s information technology professionals reside in Bangalore. Moreover, according to StartupBlink, Bangalore ranked 1st in India and 21st globally among cities measured by quantity and quality of startups and business environment.

“With several startup offices, venture funds, angel investors, and coworking spaces, it is easy for Bangalore startups to get feedback from their peers, hire talent, and find mentors in other successful companies,” reports StartupBlink.

London produces more tech startups than any other city in Europe. Estimates suggest that some 60 companies are launched each hour in London. Moreover, despite the United Kingdom's decision to leave the European Union, analysts predict that the city will continue to flourish. Some experts have even gone so far as to suggest that London is poised to become the next Silicon Valley.

"We're actually building something much bigger. I'm talking about fashion, media, finance, design, marketing, and property. We are the world leader in all of these spaces and that's what makes London unique," says Alex Wood, editor-in-chief at The Memo.

The city offers enticing tax breaks; making it easier to start a company and procure investment. London's technology sector raised £2.45 billion in funding in 2017. Some of the biggest deals last year included a £391 million Series B investment into Improbable, Deliveroo (£364 million), and Truphone (£255 million).

RocketSpace is one of the London's premier tech communities. With access to growth-oriented amenities, value-driven programming, and corporate partnership opportunities, RocketSpace supports high-growth tech startups and scale-ups. In fact, RocketSpace has supported 20 startup unicorns including Uber, Spotify, and Zappos. New York City was ranked as 2nd leading tech ecosystem in the 2017 Global Startup Ecosystem Report. The city is flush with venture capital funding; making it easy for tech startups to acquire capital and scale fast. On average, startups raise $568,000 in early-stage investments. Moreover, New York City is the 2nd largest startup ecosystem in the world, with 6,300 to 7,800 active startups. Additionally, the startup ecosystem is ranked as the 3rd most valuable, with an estimated worth of $71 billion.

In a recent interview with The Verge, Shan-Lyn Ma, CEO at Zola said that she chose to build her tech company in New York City because of its talented workforce. "New York is not at a point where we've had multiple rounds of successful startups exit," said Ma. "We've built up a critical mass of tech startup talent across engineering, product design, et cetera."

The city's supportive tech community provides startup founders with the directional insight needed to hurdle roadblocks and scale at a higher velocity.

"There's now a great ecosystem of founders and other entrepreneurs who really are supportive and want to see each other succeed," said Ma. "There are people that you'll find at the same stage as you, as well as a few stages ahead who have been operating longer, so that you will be able to get advice from people who are really wanting to help because they're really wanting to see this ecosystem win and thrive."

According to Kraig Swensrud, Founder and CEO at GetFeedback:

"Having started two businesses in Silicon Valley, I can't imagine setting up shop elsewhere. My latest venture, GetFeedback.com, is based in downtown San Francisco. Being steps away from hundreds of other tech companies is invaluable; I am able to connect with some of the tech's brightest minds on a regular basis to share best practices, ideas, and war stories." Melbourne ranks as a leader in healthcare, education, stability, culture, environment, and infrastructure. The city scored an impressive 97.5 out of 100 rating on the Economist Intelligence Unit's liveability survey. Moreover, the University of Melbourne's startup accelerator, the Melbourne Accelerator Program, has been operating since 2012 and was recently rated as the top university accelerator program in Australia.

"Today, Melbourne’s ecosystem is flourishing and a swath of international tech companies like Zendesk, Slack, Square, Hired, Stripe and GoPro are heading straight there. The energy, reputation, and support from the Victorian Government have been major drivers for this" reports Jason Lim, contributor at Forbes.

Build Your Startup in a Leading Tech Ecosystem

With locations in Silicon Valley and London, RocketSpace is an industry-leading tech community built for high-growth tech startups and scale-ups. With access to workspace, programming, and more, RocketSpace fuels tech startup innovation. RocketSpace alumni include Uber, Zappos, and Spotify. 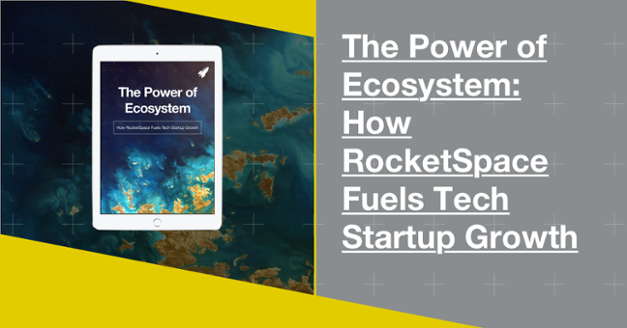